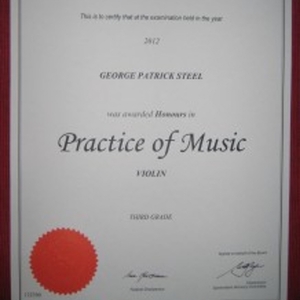 I’m a bit late in writing this post about my student, George Steel, who experienced a year full of great achievements in 2012. It’s better late than never, however, and George really deserves the kudos! George just turned ten years old in December, and recently entered Grade 5 at Mater Dei Catholic School. His parents, Trish and Tony, became aware of George’s affinity for the violin when he continually stopped at “V for Violin” in his alphabet cards as a very young child. On one occasion, he even screamed when they parked in front of a violin shop and drove away without getting him a violin! George’s Dad made him cardboard violins with rubber bands for strings in increasing sizes until they were able to start him on a “real” violin with a Suzuki teacher. I was lucky enough to acquire George as a student shortly after I moved to Brisbane in 2009 and when his first teacher, Sachi Yuki, moved to the Gold Coast. George has been playing for over six years, and is now learning the Seitz Concertos in Book 4. George loves playing violin because it is fun and sometimes hard. His favorite piece is Gavotte by Becker because he likes the variety in the piece, changing from sounding like dynamic fireworks to gentle snowflakes. At the beginning of 2012, George auditioned successfully into the Western Suburbs String Orchestra. He loved his first youth orchestra experience, and he looks forward to another year of great music with them. I attended WSSO’s end of year concert, and I was truly impressed with the caliber of the orchestras that performed, not to mention George’s beautiful onstage posture and lively bow technique. Another great success for George was completing his Suzuki Level 2 Graduation. The Level 2 graduation entails video recording a performance of Beethoven’s Minuet in G, which is a particularly challenging and mature piece, and submitting it for review at the Suzuki Music Education Queensland. A glowing report was sent back to George, praising his musicality, intonation, tone, and great bow technique. Perhaps the most monumental achievement for George last year was receiving an A (Honours) on his Grade 3 AMEB exam. George worked towards his goal of doing the AMEB exam for most of the year. I was continuously amazed with the consistent, methodical, and tireless effort he put into preparing for this massive exam. In an AMEB exam, students are tested on five prepared pieces in three different categories, sight-reading, aural, major, melodic minor, harmonic minor and chromatic scales, technical exercises (all of the scales and technical exercises must be memorised). Needless to say, it is a huge amount of material to learn and demonstrate competency, especially for a 9-year-old kid! I went to the examining centre to give George support, and he walked out of the exam room with a big smile, unfazed. On the feedback comments, the examiner described George’s exam as “highly successful” and awarded him an A grade. Congratulations, George!!! Besides playing the violin, George enjoys playing Galaxy Life and Minecraft. He is also an avid reader. He and I share a love for technology and we often have to stop ourselves from taking up too much lesson time geeking-out over the latest Apple product or cool new app. George has an outstanding talent not only for music, but for technology as well!